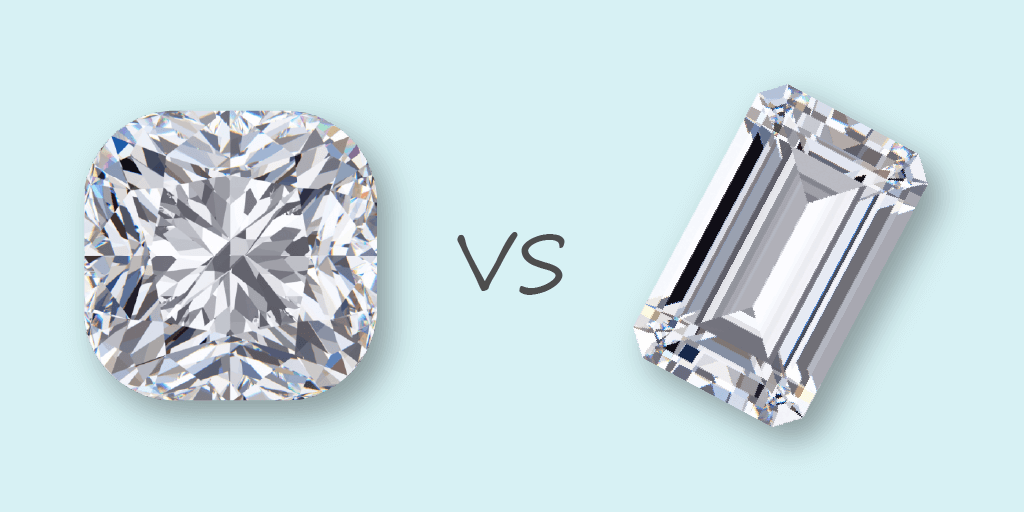 Cushion cut and Emerald cut diamonds are one of the highest selling diamonds in the jewelry domain. There are so many varieties jewelers can create with a beautiful gem like diamonds, out of which the cushion and emerald cut are the most appreciated in the market.

We can alter the design and appearance of any diamond in numerous ways. A diamond can change the complete look of any accessory. Diamonds are of such a diversified nature, that they can be worn on any occasion and will fit perfectly.

The appearance of a diamond is influenced by certain natural factors and manual factors like cuts. Cuts are the most crucial element since they provide maximum brilliance to even a slightly dull color of the diamond. The cuts are proof of flawless craftsmanship and can enhance even a dull diamond.

The cut determines the brilliance of a gem and also its shape, and there are various types of cuts based on the form and desired appearance of the diamond. These are round brilliant (the most common type of cut), pear cut, marquise cut, oval cut, princess cut diamond, cushion cut, emerald cut, radiant cut, and Asscher cut diamond.

What is a Cushion cut diamond? 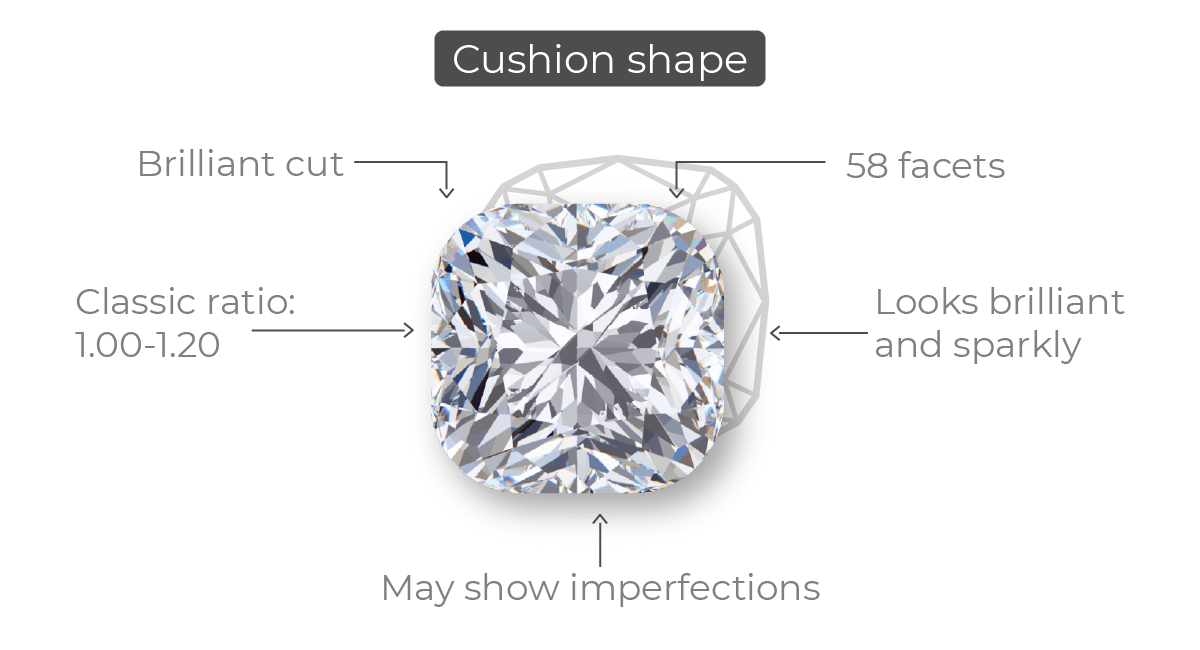 The cushion cut is an elegant cut of diamond, which has been derived (as the name suggests) from the shape of a pillow. It is also known as a mine cut or an old mine cut diamond. The shape of these cushion cut diamonds is either square or rectangular, with the corners of the shape rounded to represent a pillow.

This graceful cut has been in fashion for around 200 years and has evolved itself from an old classical design to a more modern choice. It is much preferred these days due to its affordability as compared to round brilliant. Its appearance is as elegant as its round counterpart but gives a little edge to the basic classic round brilliant cut diamond.

It is said to have been discovered in the mines of Brazil and then in the mines of South Africa. Hence, the name it got justified its origin, the mine cut, and the old mine cut. Initially, the cushion cut diamond had 58 facets, and as it molded itself into modern design, it had 64 facets. The modern cushion cut diamond is much more brilliant than the older designs, due to an increase in the number of facets, hence increasing the brilliance.

What is an Emerald cut diamond? 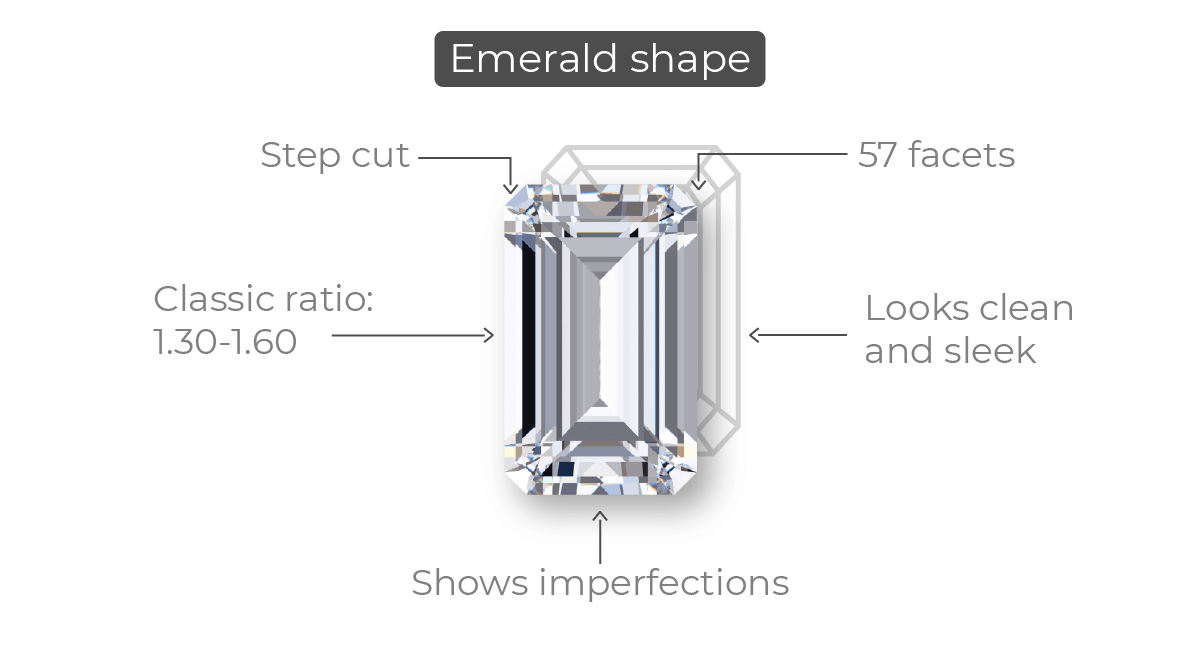 The emerald cut is a newer alternative to the variety of cuts available in diamonds. This is an exceptional and extremely rich-looking cut, which is classy, to say the least. It is the most versatile cut and form available in diamond varieties. The other cut shave facets which bring out the best in the diamond, while the emerald cut is a stepped form of cut, which allows us to see the shape of the diamond as we see below.

Their rectangular facets are the thing that separates the emerald cut from the other traditional cuts. These parallel facets are separated and the corners of the shape are chiseled, in order to prevent any damage or chips in the diamond. These chisels are also further carried on as linear parallel facets to the main face of the gem.

It was discovered in the 1500s as a table cut which it was commonly known as. It became well known due to its less craftsmanship pressure. Back in the day, it prevented the chipping of the diamond. It got even more attention during the Art Deco movement, with its clean sharp lines and parallel faces in the craftsmanship of the emerald cut diamond. 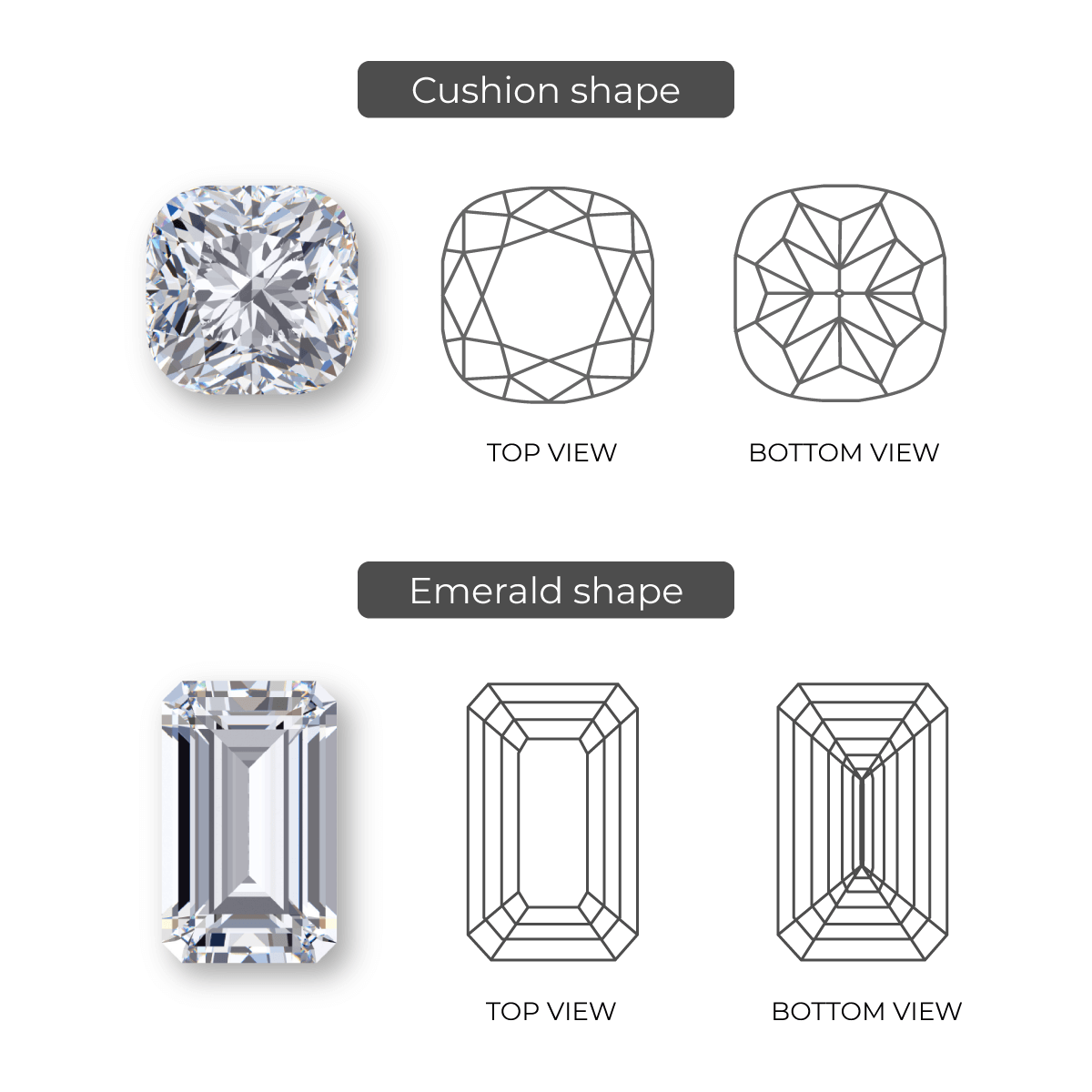 Selecting between a cushion cut and an emerald cut can get confusing. To help you select the more suitable one for you, we have made a detailed comparison of both these exquisite cuts. We have highlighted their differences and similarities. We have also compared them on different parameters like size, appearance, and styling options. 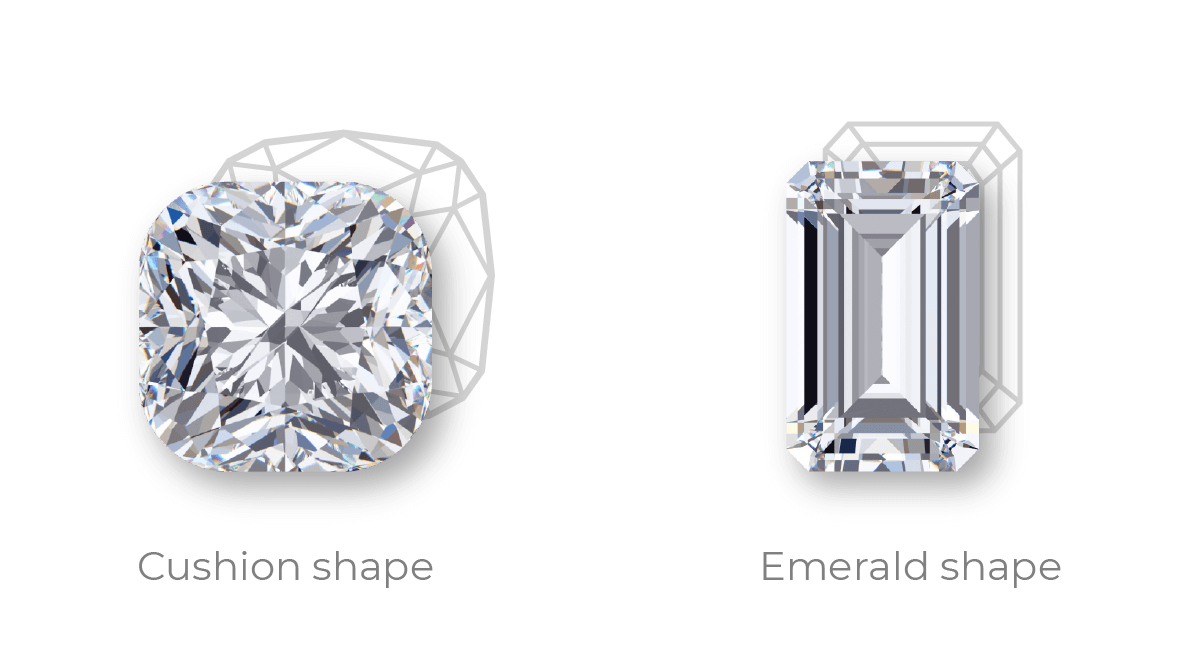 The shape of a cushion cut diamond is generally square, hence the length to width ratio being 1.0. Sometimes the cushion cut is available in a rectangular form, which allows for the common ratio to be anywhere from 1.1 to 1.2.

Due to its rounded shape, it is very safe to use in adverse conditions, without the fear of it chipping or breaking. The cut is specifically known for its fire (dispersion), which is the light of other colors that it reflects. This feature adds a highly elegant look to the already vintage cushion cut.

The shape of the emerald cut is generally rectangle, but sometimes square can also be used. Emerald cut refracts white as well as colored light as efficiently. It has a large surface table, hence it is possible.

The shape is generally a rectangle, hence the preferred ratio is 1.3 to 1.6. The most commonly used ratio for the emerald cut gem is 1.5. There are cases where the emerald cut is a square, in this case, the ratio would be 1.1. The long and glassy body of the emerald exudes royalty from the wearer. The glassy and elegant appearance of emerald cut makes it a modern choice among the edgy classic wearers. It is a little more unsafe than the cushion, due to corners, even though chiseled. 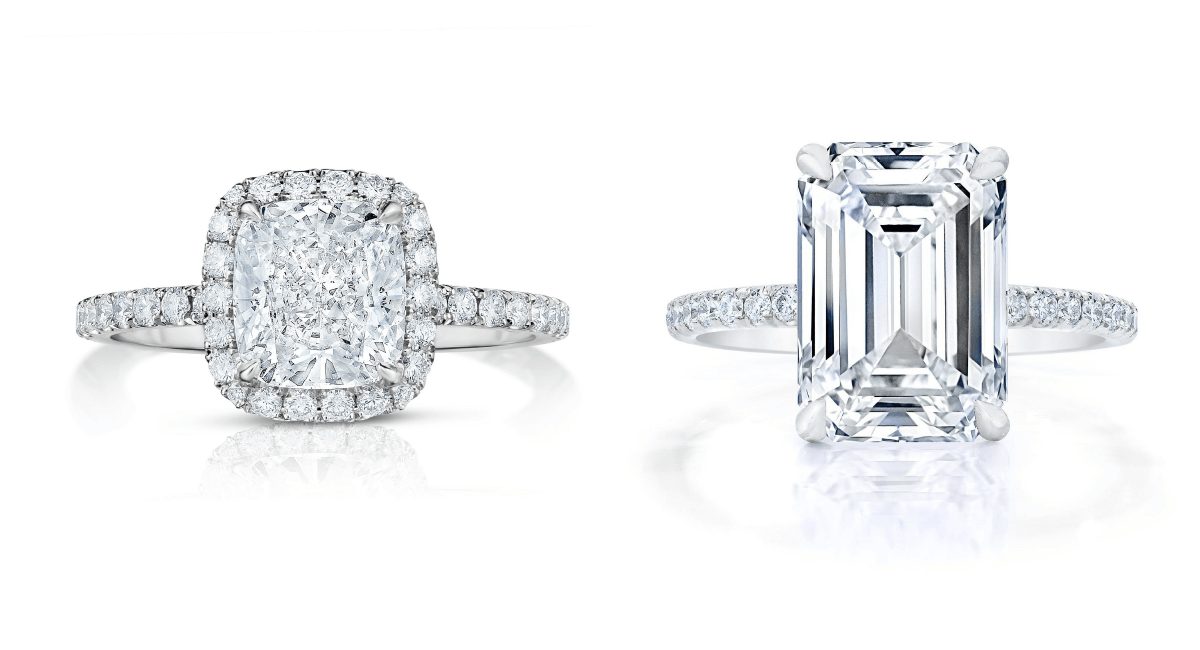 Cushion cut diamonds are preferred in engagement rings because they are vintage and elegant options. Every metal which is used to hold the gem can be used to bring out a different look of the diamond.

A white metal like silver, white gold, or platinum is preferred to be a host to this diamond cut. Generally, for wedding rings, white gold and platinum are preferred, sometimes even palladium can be used by certain people.

These white metals let the diamond be on its own, while just providing a basic hold to the diamond. Yellow gold gives a vintage highlight to the gem and hence complements the vintage look of the cushion cut. The rose gold metal allows for a romantic tone.

The emerald cut diamond is seen as a unique option for wedding and engagement rings. The metals which are chosen for the design are picked very carefully but according to the demands of the customer. Generally, white metal is preferred for the base metal, because the white color of the metal enhances the diamond’s brilliance but at the same time balances it too without taking away too much attention from the main diamond itself. These metals are silver, white gold, or even platinum. For engagement rings, white gold or platinum is preferred.

With the increase in alternatives to classic wedding rings, this is one ring that is being loved by consumers. It’s vintage and has a classic appearance. It is also a more affordable and yet similarly elegant piece as compared to the round brilliant alternative.

The cushion cut is majorly visible in engagement ring designs in contrast to other accessory designs. The emerald cut is also a very unique and versatile option as an engagement ring. It too is majorly preferred in wedding rings rather than any other jewelry options.

Due to the high brilliance of the cushion cut, we observe that a ring of this cut allows a fuller look at the wearer’s fingers. The form of the cushion is a curved form that allows the fingers to appear fuller than they actually are. Hence, these are sometimes referred to make the wearer look healthier.

The side elevation of the gem is pretty shallow and hence less light travels inside the gem. Due to fewer cuts and parallel cuts, this allows for an easy view into any defect which would be there in the gem.

Although the diamond has a lot of facets and symmetry it also makes it less viable for some of the classical settings. The diamond also can be a little more expensive than many settings and cuts.

Both these diamonds are extremely different and do not have many similarities but here are some of the similar things they have. 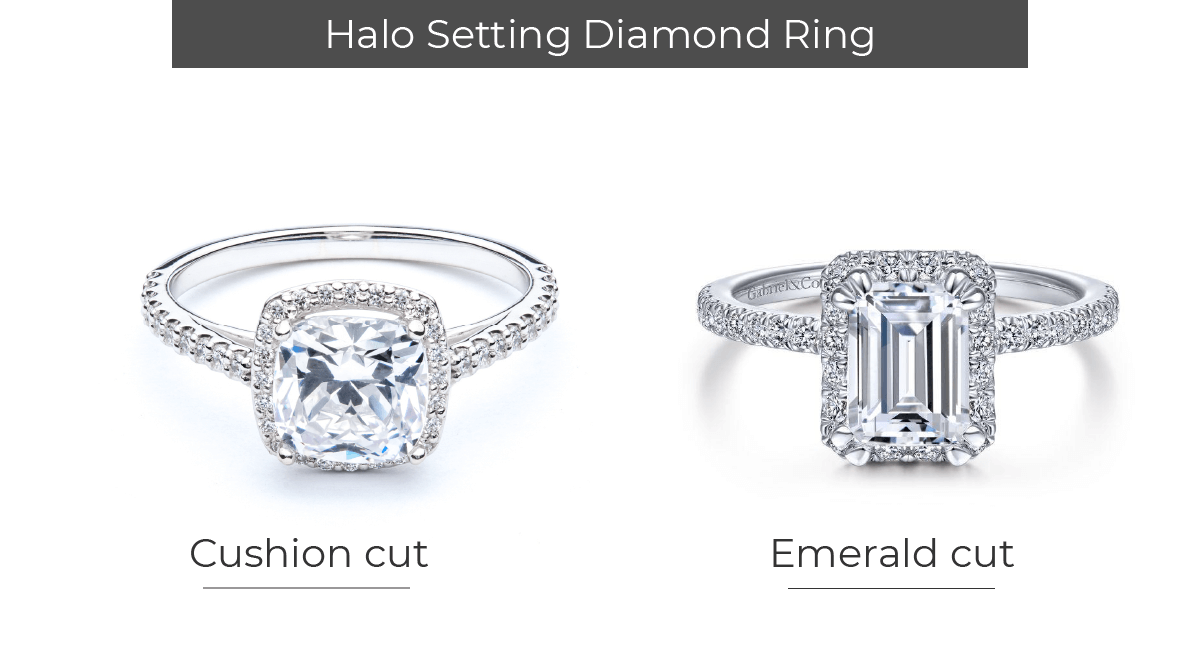 Halo is a popular setting that allows for the halo to highlight the central emerald cut stone. The setting brings out the main shape and form of the cut and thus adds detailing to the basic design and not-so-basic form of the cut.

The prong setting is an advisable setting for the cushion cut since it ensures maximum brilliance along with optimum safety. There is a rift between either the 4 prong setting or the 6 prong setting. Either of them has their advantages to the point.

The 4 prong setting is a setting that allows for maximum brilliance as compared to the 6 prong setting, due to fewer metal arms blocking the light entering the diamond. Although, there isn’t much impact of this phenomenon on the cushion cut, due to its light reflection from the table of the facets of the diamond.

For a larger or a rectangular cushion cut diamond, it is preferred to select a 6 prong setting, to ensure the utmost safety of the diamond. 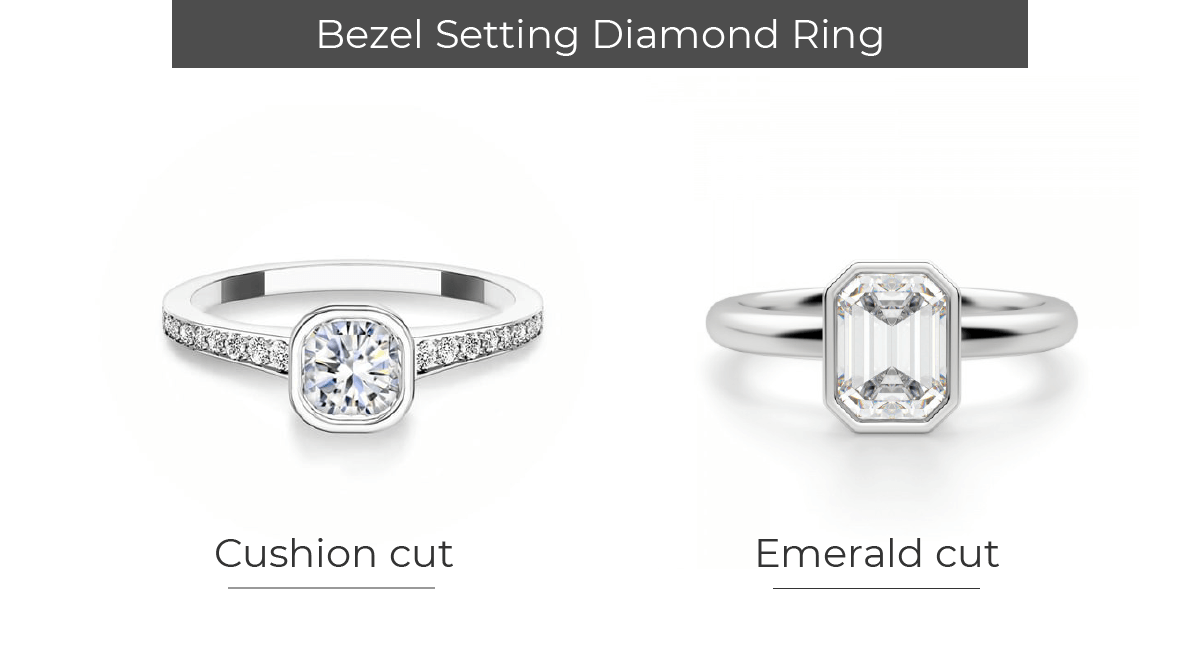 Bezel cut is a stylish setting and can be worn with anything to give it a good look. The bezel is definitely a setting that provides utmost safety to the diamond and in turn highlights the form of the cut. Due to the diamond being covered from all sides, we observe that the diamond shines less brilliantly. Despite this drawback of the bezel setting, this setting is a favorite for its form and elegance and is worn on all occasions equally elegantly. 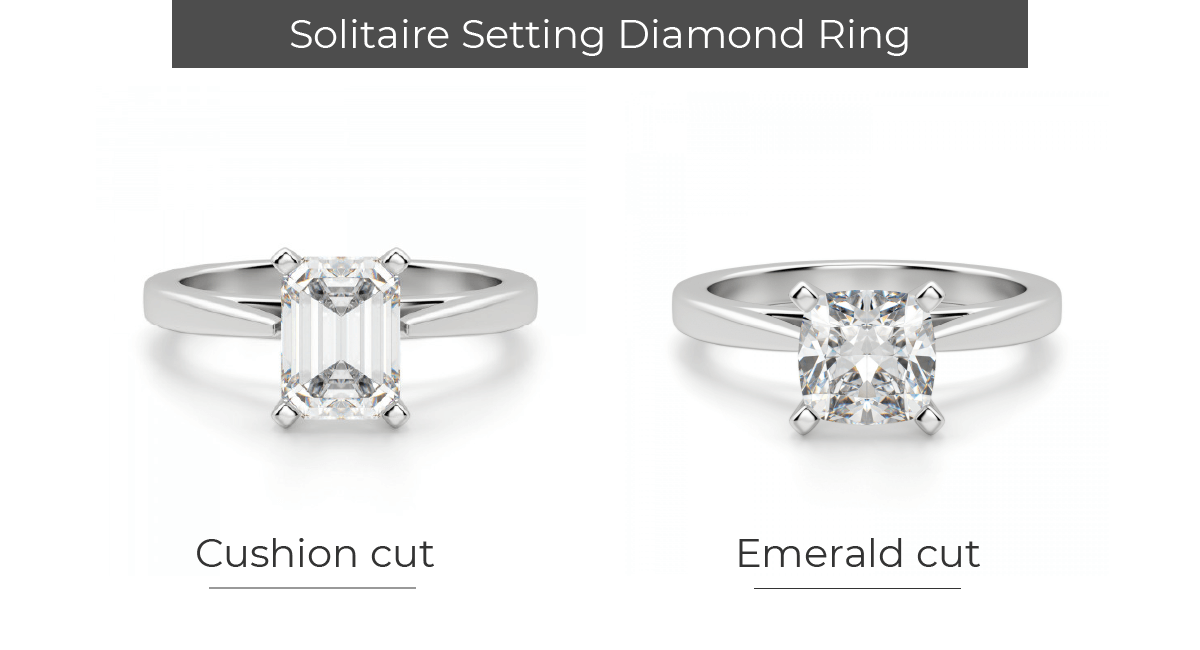 The most famous and preferred setting for the emerald cut gem is the solitaire setting. This setting is perfect since it allows for the unique geometry of the emerald cut to take the central stage and not allow any other pattern to overshadow the main design of the cut. It is a very minimalistic design but sophisticated for anyone who prefers simple and yet classy engagement rings.

Both these diamonds are available in many designs and varieties.  Both of these are mostly used in engagement rings with a whole range of settings. Each of them provides a separate set of advantages. The cushion makes a wearer’s fingers look fuller whereas an emerald one makes the fingers look slender. Both represent elegance and vintage feel along with their own unique beauty as the wearer adorns them. The cushion cut and emerald cut are both versatile and unique cuts that ooze beauty and elegance in their own unique ways. They are perfectly beautiful in their own ways.

Must-Know Things About The Artistic Emerald Cut Diamond
Next
A Pear or an Oval? What Type of Diamond Should You Buy Next? 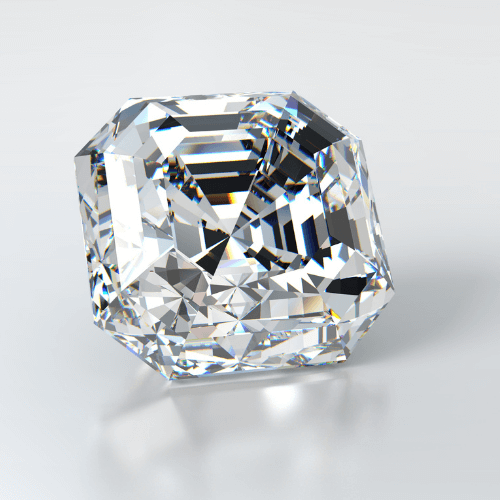 When it comes to diamond cuts in the mainstream market, they are either brilliant cuts tha... One of the most alluring objects on this earth is the diamond. They are so elegant, beauti... 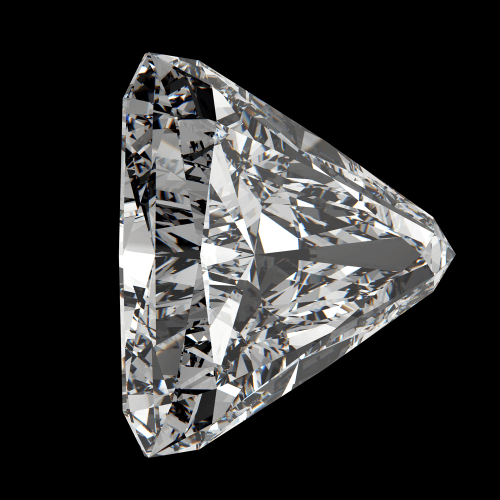 Diamonds have always held a special place in everyone’s hearts since these gemstones are...